For Emily (a not so quiet passion) 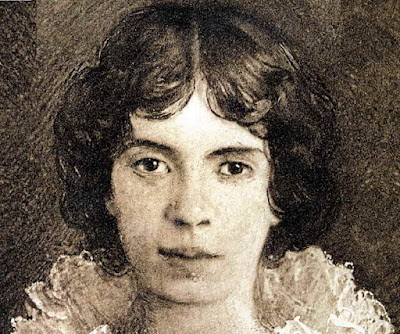 Just got around to watching the 2016 dramatisation of Emily Dickinson's life, A Quiet Passion, by screenwriter and director Terence Davies and thought it might be apt to come out of my blog hibernation to write a few words about it, Seeing as Emily herself lived in a kind of hibernation. In part this was due to the times she lived in, times when women's words were only allowed so far through the golden gate by the bearded gatekeepers who doubled as the gate-builders, those with hammer and nail in hand failed to fully grasp the main difference between sword and pen, namely that the male advantage is lost with the latter.

Sticks and stones may hurt her bones, and did, but her words would not be silenced and shut out for ever. Her words did not rust or warp, as the nails and pales of the gate did. And so through 'the gate' to immortality those words took her and with her us, the women writers who followed her, quiet and not so quiet, indeed less and less quiet, if in her shadow still and always. But it is a warm and welcoming shadow.

The poem I wrote last night was kind of written in her honour, though she would probably turn in her grave to hear it, so I don't presume it is for her exactly. In fact I wrote it in bed wrestling with wakefulness in the wake of watching her story portrayed with startling intensity by former 'Sex And The City' star Cynthia Nixon, a role for which she was nominated for Best Actress, and a story that made me feel, more than I had done before, that Emily, whose collection of poems I have only just last year begun to read with any close study, was a kindred spirit indeed.

So as her bright light and long shadow grows on me, a developing influence that along with lack of sleep probably shows through in this poem, I say cheers Emily Dickinson, a not so quiet passion.

A not so quiet passion